For a new television series, TravelMåtes, we travelled to Denmark to explore this beautiful country. The famous Dieuwertje Blok will receive a different famous Dutch person each episode with whom she will visit a special place in Denmark. Her guests are TV journalist Twan Huys, Stylist Maik de Boer, Cyclist Leontien van Moorsel, Actress and artist Carry Tefsen, Great Dutch Beakoff baker and presenter Robèrt van Beckhoven and the famous writer Ronald Giphart.

END_OF_DOCUMENT_TOKEN_TO_BE_REPLACED

We are delighted to announce our latest short film DE OVERKAMMER. The collaboration with the talented Raymon Hilkman went so well with the film MOFFENMEID that we stepped into his next short film without thinking. THE OVERKAMMER is about a young student who literally battles with his receding hairline. Bald or not bald is the question. The film will be shown at the Netherlands Film Festival. BEBALD and join the movement !!! 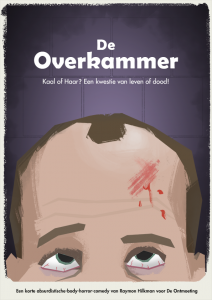 END_OF_DOCUMENT_TOKEN_TO_BE_REPLACED

It appears to be very quiet at EQUS FILM. But appearances can be deceiving. In these bizarre times of Corona, where our industry and our filmmakers were hit hard, we worked very hard behind the scenes to grow and implement our new plans for the future. EQUS FILM is ready for the next step in her life and that means breaking free from the past. A past filled with a lot of fun, wonderful learning moments, a lot of great film-and video productions and getting to know the best crew ánd clients. But also a past in which the desire to choose a clearer future began to take shape. In that future we will take all the beautiful people with us and we will propagate our chosen path even better through a new look, feel and name. It’s almost time…… 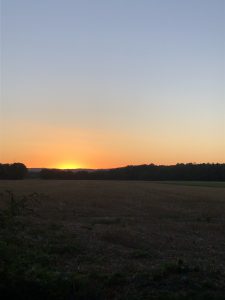 END_OF_DOCUMENT_TOKEN_TO_BE_REPLACED

We are very proud of the entire cast and crew of Moffenmeid (English title: DISGRACED) who, with passion and perseverance, created this beautiful short film about a hidden part of World War II. We are very honoured that IFAN COMPANY was able to contribute to this film and to the development of all the young talent that we got to know on set.  This film is a great example of what can be achieved when a good story meets great people with passion, creativity, talent and team spirit. We hereby proudly present MOFFENMEID, that can be seen on the Dutch tv channel VPRO 3LAB. 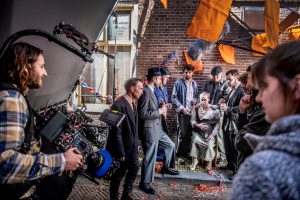 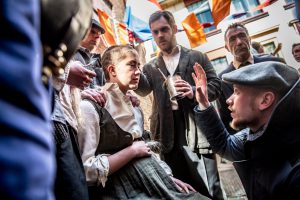 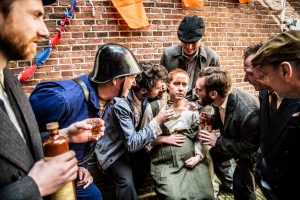 END_OF_DOCUMENT_TOKEN_TO_BE_REPLACED

It was yet another exciting year for IFAN COMPANY. We look back on 2019 with joy in our hearts because we were able to work with so many talented, creative and very sweet filmmakers and customers. We wish you all a great holiday and we hope to see you again on set in 2020!

END_OF_DOCUMENT_TOKEN_TO_BE_REPLACED

Our short film SCREWED will be shown on board all KLM Royal Dutch Airlines aircraft that fly intercontinental from the first of december 1919.

‘Screwed’ is a funny, silent film about a man waiting for his first date at home.

Extra special about ‘Screwed’ is that this film is not only shown on board of KLM airplanes, but that KLM also contributed to the making of ‘Screwed’ because IFAN COMPANY has a ‘profit for purpose’ structure. We reinvest our profit, including that of our commercial productions that we make for our client KLM, such as the cockpittales click here in the production of short fiction films where we give new talent a chance.

So on your next trip, fly KLM and enjoy a great flight and a great movie. 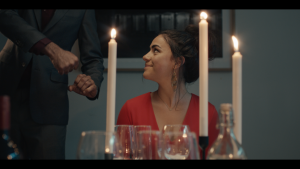 END_OF_DOCUMENT_TOKEN_TO_BE_REPLACED

IFAN has been nominated in the category ‘creativity and innovation’ for the awards ceremony of the AVOND VAN DE OPDRACHTFILM with our film for KLM Royal Dutch Airlines ‘The TULIP’!!!

We are obviously very proud of the entire team for this special nomination, but we are also very proud of our cooperation with #KLM who proves with this nomination that she is not afraid to work together with a different kind of production company where young and upcoming filmmakers translates their message to film.

END_OF_DOCUMENT_TOKEN_TO_BE_REPLACED

At IFAN COMPANY we reinvest the profit from our commercial activities into our own foundation where we produce short film with talented and upcoming filmmakers. Last saturday we showed our latest co-production KRAUTGIRL (MOFFENMEID) to an enthusiastic audience. We are also very proud to announce that KRAUTGIRL has been selected to the prestigious student competition of the Dutch Film Festival. 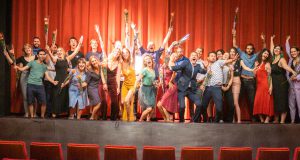 END_OF_DOCUMENT_TOKEN_TO_BE_REPLACED

IFAN COMPANY co-produced the short film ‘Moffenmeid’ about a Dutch girl that was taken by an angry crowd after world war II to cut her hair and publicly shame her for having a relationship with a German soldier. An intense story written, produced and directed by Raymon Hilkman! A wonderful crew, amazing cast and many, many very sweet sponsors and volunteers made this film a reality. At IFAN COMPANY we work very hard to earn money to make so we can continue to make short films like these with a mix of experienced filmmakers and young talent alike. 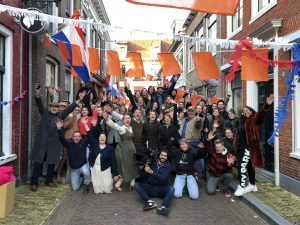 END_OF_DOCUMENT_TOKEN_TO_BE_REPLACED

At the Niederrhein-Filmfestival, our short film SCREWED was awarded the audience award. Very proud of director Tim Schijf and producer Marijn Liek and of course of all cast and crew!!! 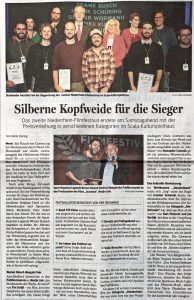